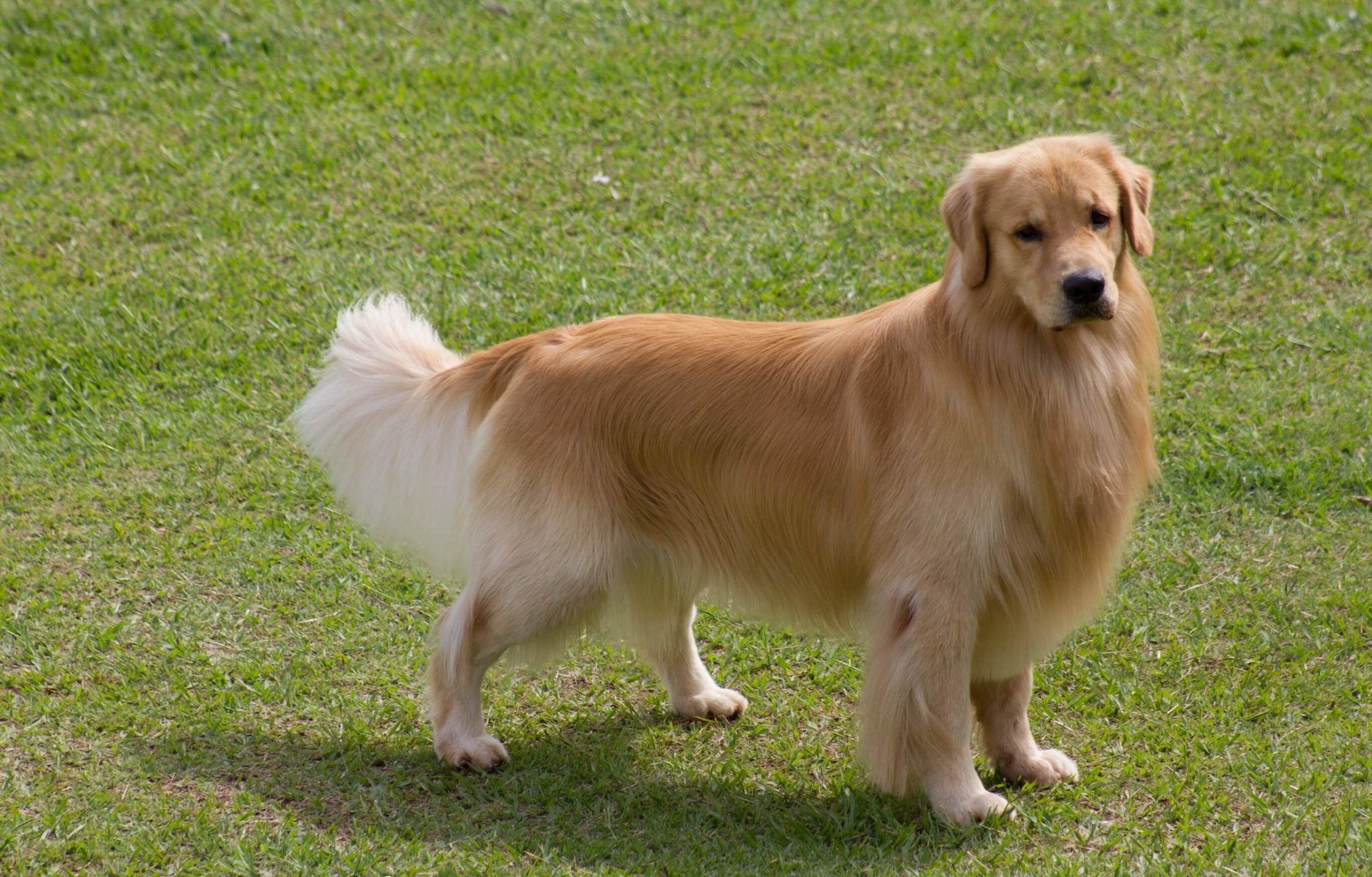 Golden Retriever has friendly and gentle temperament which means that it is unsuited to being a professional guard dog, but its temperament has also made it the third-most popular family dog breed (by registration during 2015-2018) in the United States. The breed is also the 5th-most popular one in Brazil and Australia, and the 8th-most popular in the UK.

History of the Golden Retriever breed

The main prerequisite for emergence of the breed was an eternal passion of the English aristocrats for hunting. In the 19th century, the main entertainment of British and Scottish Esquires was hunting and shooting ducks. The venerable peers disappeared for days in the forests and in the swamps, boasting to each other with their trophies, guns and, of course, dogs. However, if the gentlemen had complete order with the hounds, then four-footed hunters, able to find as hot quail in the heather thickets or swim after a duck that fell into the lake, were in great deficit. Commercial demand generated supply, and soon shaggy dogs with an unusual golden coat began to dissect through the valleys of Scotland. 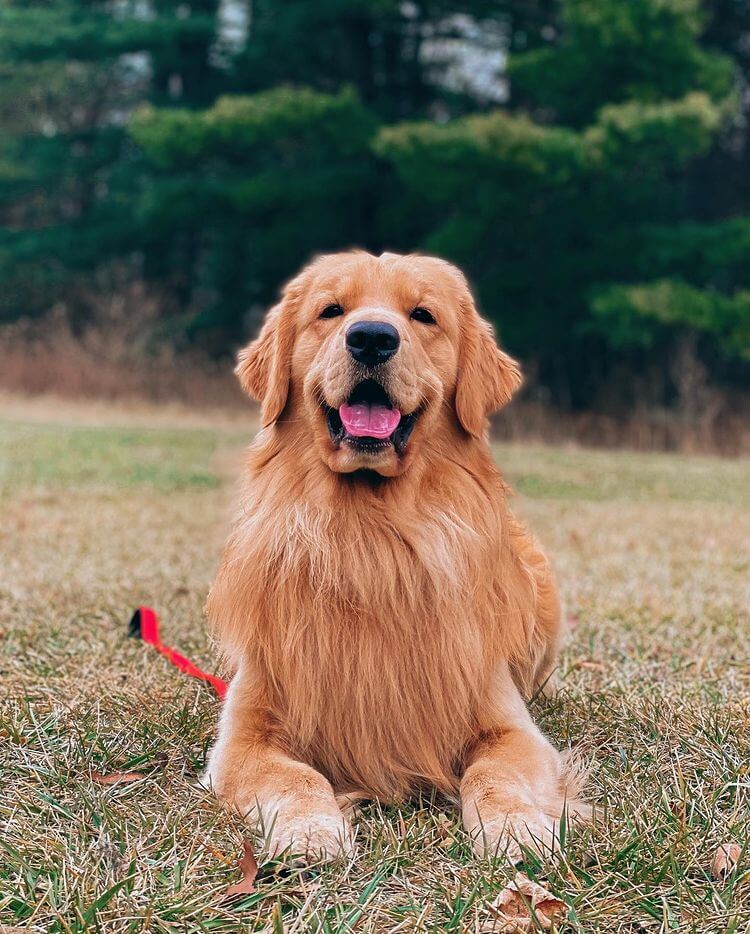 The emergence of Golden Retrievers as an independent breed is usually associated with the name of Dudley Marjori banks, a Scottish lord and part-time breeder-amateur. He showed the world a completely new variety of the hunter dog, who was not afraid of water and who skillfully imported a padded bird. For a long time it remained a mystery, whose blood flows in the wards of the lord, until in the middle of the 20th century, the secret records of his studbooks were made public. As it turned out, the Goldens were given their genes by the Water Tweed Spaniel, Labrador, Bloodhound and Straight-haired Retriever. At the same time, the first offspring were obtained as a result of mating a tweed water spaniel and a straight-haired retriever, which had a yellowish coat.

By the 20s of the last century, the breed was already quite popular not only in Europe, but also among breeders of the New World. In addition, the USA and Canada have formed their own standards for the appearance of Golden Retrievers. So, for example, overseas, individuals with a more intense and dark coat color were preferred.

Golden Retrievers are moderately pumped up handsome men with heartfelt eyes and luxurious iridescent hair. Goldens owe their recognition not so much to their own charm as to the efforts of marketers. The breed was especially actively promoted by American cinema. It is enough to watch a couple of comedy melodramas produced in the USA to understand, if an American family ever decides to have a dog, then in 9 cases out of 10 it will be a Golden Retriever. 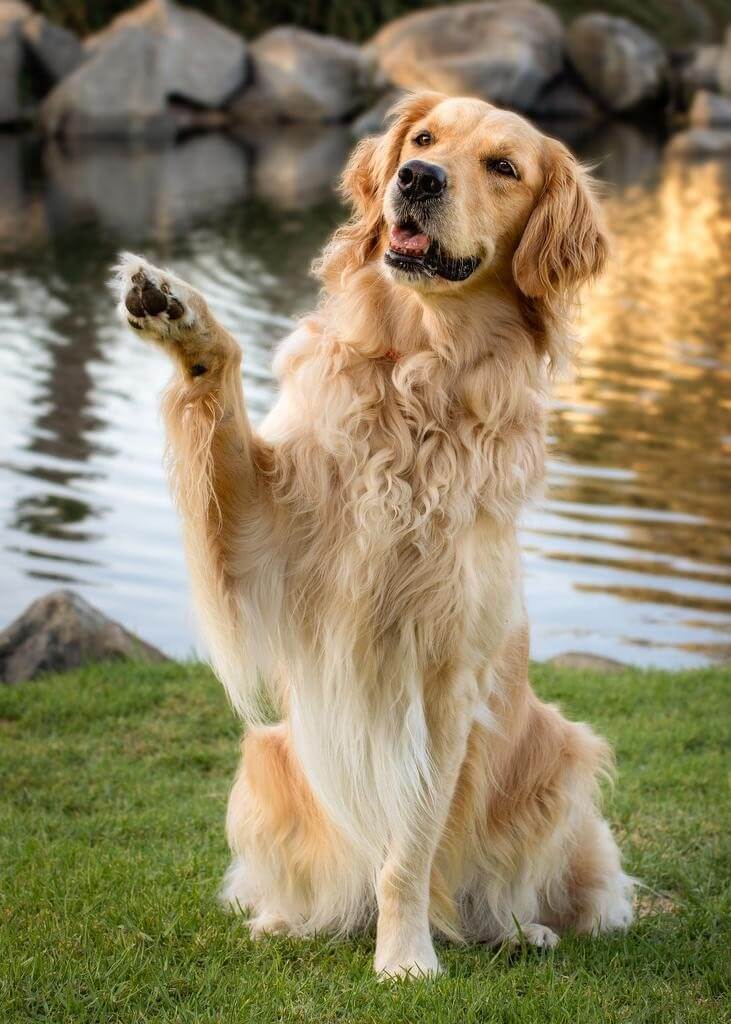 The sexual type in representatives of this breed is pronounced. The growth of an average males ranges from 56-60 cm, and his weight can reach 41kg. Females are much lighter (average weight— 25-37 kg) and smaller than males (height— 51-56 cm).

Despite the presence of a single breed standard approved by the FCI, experts divide golden retrievers into three types:

Representatives of the first group are the natives of Foggy Albion, with extremely massive legs and a wide skull. They are distinguished by a lighter coat color, up to white. It is the English type that is most common in Europe and Russia. The range of American breeders wards is less impressive, but from USA Golden Retrievers boast a graceful posture and generally more elegant appearance. At the same time, the shade of their coat is so me what darker than that of their British counterparts. A distinctive feature of Canadian retrievers is a thin physique with a fairly high growth. The coat color of the “Canadians” is even more intense and darker than that of the “Americans”.

The skull is massive, convex-angular. The transition from forehead to muzzle is distinct and smooth. The occipital protuberance is smoothed, the cheeks are flat. The animal’s muzzle is long, even, gradually tapering from base to nose.

Black, moderately dense and dry. The upper lip hangs noticeably over the lower lip, but does not go beyond the jaw. The lips completely hide the dog’s teeth and gums, forming small folds at the corners of the mouth.

The retriever’s jaws are strong and fairly wide, with a pronounced scissor bite. The teeth are white and large. The incisors are aligned.

The lobe is massive, mobile and black. The nostrils are wide open.

Moderately long, hanging, lowered along the cheeks of the animal. The base of the ear is wide, the tip is narrow, smooth and rounded. Placement – slightly above the line of the eyes.

Large, deep-set, rounded. The golden retriever has a smart, friendly look. The color of the iris is from brown to dark brown. The eyelids are black, dry, close to the eyeball. An important condition: in a dog looking straight, the whites of the eyes should not be visible.

Massive, set high and of moderate length. The neck muscles are strong, developed, there are no folds or sagging.

Adults have a strong, tightly knit body with prominent muscles. The back of Golden Retrievers is straight, with a prominent loin and pronounced withers. The croup is massive, slightly sloping, rounded. The rib cage is of moderate width, sufficiently deep. The tucked-up belly line ends with a short and well-fitting groin area.

Moderately long, with a wide, thickened base and a tapered tip. Located below the back. In a calm golden, the tail is lowered, in an excited golden, it is raised to the level of the back.

The forelegs are well muscled, dry and straight. The shoulders are strong, with massive shoulder blades and the elbows laid back against the body. The shoulder angle does not exceed 90 degrees. The pasterns are strong, but short, set at a slight slope.

The hind legs are strong, with well-developed muscles, well spaced apart from each other. The hock joint in Golden Retrievers is low and pointing backwards. Front and hind feet are of medium size, rounded. The pads are massive, with short claws; the fingers of the animal are folded into a ball.

The coat of the Golden Retriever is very hard and water-repellent. The hair is quite thick and fits snugly to the body, hiding an abundant undercoat underneath. The structure of the coat can be straight or have alight wave, and its length varies depending on the part of the body. The longest coat is found on the chest, ears, body, back of all four legs, and the lower part of the tail. Areas of the body with short hair are the head, feet and front of the limbs.

All shades of gold are considered reference, up to the transition to cream color. Lighter colors are acceptable for feathering on paws and tail suspension.

The list of breed defects includes any deviations from the characteristics prescribed by the standard. For example, it is undesirable for a golden retriever to have sparse and long hair, white stripes on the chest, and eyes that are too light and close-set. The following vices may be the reason not to allow the animal to compete:

Angry or conversely cowardly individuals, “goldens” with a small head, short ears or small teeth will also not make a serious career.

Video Is the Amazing Golden Retriever the Perfect Dog?