Everyone knows that the Labrador is a special dog and is very obedient, playful, affectionate and generally just a great dog, but to train is necessary to bring up obedience in it. Training of a Labrador is different from one of a hunting dog.

Start training a two month old Labrador puppy by teaching it its name and making it remember such a simple command as “place”. 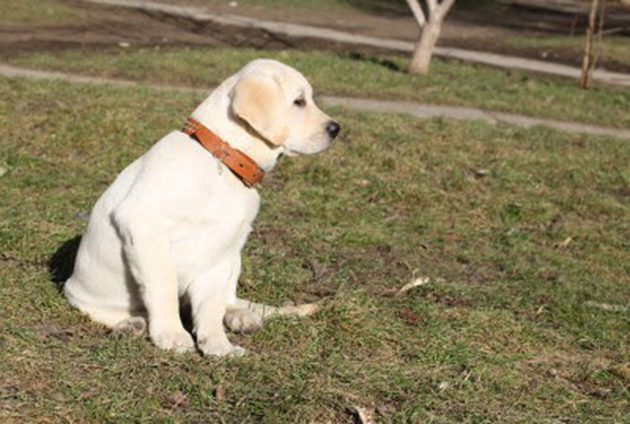 “Place” and the Nickname

So, first let’s see how a Labrador puppy is to accustom to its name. Nicknames for dogs are important. In fact there’s nothing complicated here, just as often as you can repeat that name, referring to the puppy. Best way to remember a nickname for a dog is when you call it to eat.

Attention! At this age the puppy should be fed at least 5-6 times a day. In addition to invitations to food, puppy need to be called by name during the games.

After the nickname of a puppy is learned you can move on to studying other commamds. And the following command, which must necessarily be studied by your pet is command “place”. This is a very important command, because it will serve as a basic one for the combination of commands.

So, how to teach a Labrador puppy to understand command “place”. First and foremost, this is the place for the puppy to show. In order to do this, the puppy’s place in the first place should be seen. It can be a pillow, or a blanket on the floor which will serve as a crate. When a puppy runs and plays and then falls asleep in the most unexpected place, you need to carry it there and every time you carry the puppy in its place this command must be repeated. 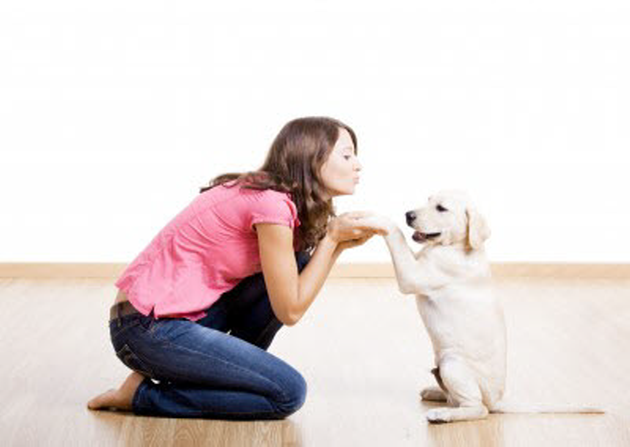 So, in order for the puppy to understand and unquestioningly obey the command “Come”, you must pronounce its name command “come.” That is the command you need to say clearly and loudly.

Advice: if the puppy doesn’t run to you, try the command again until the puppy reacts.

After the puppy has run up to you, you should be sure to praise the pet and give it a treat. This command should be repeated until it becomes the fully automatic to obey.

In order to teach your puppy this command, you will need a piece of sweets and a rolled into a tube newspaper. If you have these two components, you can proceed to the study the command.

Put a treat on the floor in front of the puppy. The puppy, of course, will want to eat it. As soon as it reaches for the treat, you do say command “Drop it” and spank the Labrador slightly on the nose with the newspaper.

Why for this purpose we recommend to use a newspaper? The fact is that beating the dog you can just intimidate the animal. And here the puppy will only be afraid of the rustle which the newspaper produces, but not hurt.

Then you definitely need to teach your puppy to never pick up from the floor and from the hands of strangers. For this a treat need to be rubbed in something distasteful.

For example, you can rub it with lemon, garlic, onions or a small amount of pepper. But use just a little bit pepper. After trying several times such a treat your dog will never in its life take anything from the hands of a stranger or lift anything up from the floor. This procedure must be done, because now in many major cities so-called dog hunters are operating.

To teach the puppy this command is easy. The puppy needs to stand, you need to approach it and one hand holding under its chest with your other hand you push the dog in the pelvis, simultaneously uttering the command. After the puppy has sat down, immediately praise and give it a treat. The same is for command ‘Down”.

Duration of the Training

What Goodies are Needed?

Caution! Giving the dogs candy, cookies and other pastries is strictly prohibited.

Written by Amanda Williams
I'm mother of one beautiful girl ❤️ and dog lover, have two Shih Tzu. I'm realy interested in dog training. I graduated University of Florida. Took courses and attained certification - the Certified Professional Dog Trainer-Knowledge Assessed (CPDT-KA). So this days I work as dog trainer.
How Often to Wash a Labrador Retriever: Bath Time and Shampoo Choice
How Do I Potty Train a Labrador Retriever: Techniques and Useful Tips

What Does A 4 Month Old Shih Tzu Look Like

How To Train A German Shepherd Rottweiler Mix