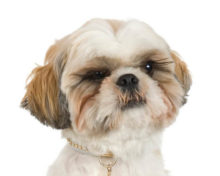 Shih-tzu dogs are small, energetic and elegant animals that have some typical features such as a rounded head with a very short snout and long, thick and straight hair. Their hair covers the whole body and head of the dog. Besides, it falls on the eyes of shih-tzu.

These dogs have a big beard and moustache on the snout. The dogs of this breed have special elegancy and beauty because of their hair of different colours.

The History of the Breed

The native land of shih-tzu dogs is Tibet. It is there high up in the mountains rolled up in clouds, where there is the dwelling place of yogis and lamas. That is why the origins of shih-tzu are covered with mysteries and puzzles.

The most popular legend is about a snow lion that has a great influence over three main powers in the world. Tang Sing, as this magnificent lion was called, could go for long distances, turn into mist or a cloud, and change its sizes. Some people believe that shih-tzu dogs resemble this great lion.

In 1653, the Tibetan lama paid a visit to China and brought several dogs-lions with him. Since then, shih-tzu dogs became a privilege of the emperor of China. Only aristocratic families could receive these dogs as a gift. There could be no thought about selling or buying shih-tzu.

Nowadays, this breed can be found all over the world and you can have a shih-tzu pet without any difficulties.

Behavior and Other Peculiarities of 4 Months Old

Although you can have your pet a bit earlier (at the age of six of eight weeks), some breeders consider the period of four months as a perfect one to choose a dog.

At first, at this age the puppy is trained to do some things without any help. For example, it can defecate in the proper place; it eats almost all food and is not scared of having a bath. Moreover, you can already walk it outside.

Secondly, four months old puppies show their character more clearly than the younger ones. You can look at its behaviour and define what traits of character it possesses.

Thirdly, it is the best time to bring a dog in your house if you have children. Specialists believe that the younger puppies can have no interest in playing with children or even avoid their company. Although if you have decided to take a puppy and your children are educated enough not to hurt it, you can certainly go to a breeder and buy a four months old dog.

Many mothers tell about their satisfaction with shih-tzu. They say that they have more free time to do their own business or housework when their children play safely with puppies.

The next distinctive feature of this period is that you can transport puppies easily to another country. You must inoculate your puppy against hydrophobia at the age of three months. And, as it is demanded in many countries, a month should pass after this vaccination to bring a dog abroad safely.

What a Puppy Should Eat?

The food that your dog eats must be chosen very attentively because there are a lot of products prohibited to this breed.

Attention! Not recommended to feed puppies with pork or river fish. Also do not give your dog potatoes, noodles, legumes (peas, haricot beans, beans, and lentils), pearl barley.

Here is the list of the products your dog should eat:

Recommendation: in the period of the dentition (from three to seven months), give your puppy two or three tables of calcium gluconate or calcium lactate a day. If your pet does not eat tablets, grind them in a coffee-mill and add to the usual food.

A Puppy in the House

To have a dog in a house needs great care and responsibility that will be required not only from the owner but from the whole family. Always love your dog and the dog will love you in return.

Written by Silvia Brown
Glad to see you my friends! I started this blog several years ago and continue to write articles about dogs. I'm dog lover and my purpose make their lives happier. One day I'll open animal shelter - it's my inspiring dream ✨
Shih Tzu Training: Popular Commands and Training Tricks
Some Peculiarities of Two Months Old Shih Tzu: How to Take Care of a Puppy

It is best not to give your dog garlic and take your dog to the veterinarian if you think he has eaten any amount of garlic, even if he shows no symptoms. … The sulphuric compounds in the garlic are absorbed into the gastrointestinal tract and changed into reactive oxidants, which damage your dog’s red blood cells.

Take it out continually about every 20 minutes for the first week then expand the time a bit and work at it this way. If the pup goes to bed early for ex. at 7 pm then you wake it at 10 ish and take it out again to do its jobs. This will give it about 5 1/2 hrs more of undisturbed sleep. I hung a bell by the outside door and taught it to ring it everytime we took her outside then all of the sudden she rung the bell herself and I took her out. They are very intelligent dogs so work with it and you will not fail. Don’t expect her to be trained in a month or so most apt to be about 6 months or so. Don’t give up! Good luck.

I recently adopted a Shih Tzu puppy who is also about the same age as mentioned in this article. How can I potty train my Shih Tzu pup?