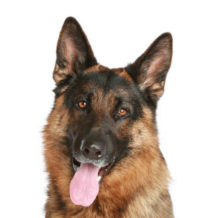 Your German Shepherd puppy reached 5 months, now, according to the growth chart, a male pup should weigh around 50,5 lbs. and a female should be about 45 lbs. How to take care of him and what is he ready to learn?

First, let’s talk about your puppy’s health. Many owners are worried if their dog is reaching the proper average size and height. Usually, the puppy will be about 21-25 inches by now, but if he’s not there yet there could be reasons for that.

Most importantly, check the parents, maybe they are a bit smaller than average – then you have nothing to worry about. Otherwise, check with the vet that his diet has all the nutrients he needs. Remember, that too fast growth at this age is also not that good for the dog as it weakens the bones.

At 5-month some of the puppies might start having one mysterious adolescent problem – panosteitis. This is a bone inflammation that normally hits some dogs at a bit later age. One sign of it is if your puppy starts limping, for example, standing up after a nap.

Worse symptoms are whining in pain, lameness, and anorexia. If you see any of these signs – get the dog to the vet. First, he will need to do some scans to make sure it’s “pano” and, if this is the case, he will prescribe the dog some painkillers and steroids, to cease the pain.

Some puppies pass this condition in a few days, for others, it might last for weeks. Try to make them run and exercise a little bit less at this period and take care that they eat and drink properly, then panosteitis should pass without a trace.

Another common problem at this age is drooping ears. First of all, don’t start any treatments to make the ears stand before 5 months, droopy ears at 3-4 months are perfectly normal, and interfering with a natural way of things can damage the dog’s health.

Important! Sometimes in time of teething the ears of the puppy can temporarily go up and down. This is absolutely normal and usually the sign that later the ears will stand themselves without your help.

But if you’re already closer to 6 months and it doesn’t look like any change is coming, you can start doing some things:

Training Pupers Not to Bit

At 5-month age, the puppy is strong and clever enough to start all the necessary obedience exercises. Biting can still be a problem while the pup is teething, but this can be solved with special toys and training.

Generally, this is the time to start firmly controlling your dog’s behavior, because now his character is still very flexible and can be bent either way. Give your German Shepherd a feeling that you’re the Alfa in this pack and he will be happy to understand the hierarchy and his place in it.

Written by Noah Sanchez
Hi, there. I graduated Bergin College of Canine Studies I loved Animal Grooming there. So it's my passion and sometimes I write articles about dogs, and also love to train dogs. I have 2 amazing friends: German Shepherds
Husky Skin Problems: Skin Parasites, Allergy and Bacterial Infection
2-Month Old German Shepherd: Average Size, Weight and Food Diet

you opened my eyes to so much in a short time, thanks. whish i could get their ears to stand

My German shepherd is also 5 and a half months old, she was doing the same . I take to a dog park where there are people and their dogs all different breeds my pup is learning from the other dogs that she needs to fit in with the pack. Its the best thing I did I was nervous at first I walked round outside the fence a few times and let her sniff them through the fence. Good luck and I hope this helps.

Susan, nice experience, thanks for sharing

My German Shepard puppy is 5 and a half months old,friendly when she gets to know you,but when walking wants to pull hard and barks and wants to growl at other dogs and people,afraid she could bite if she got loose.

How Ofte To Brush A German Shepherd
Copyright © All about dog breeds
wpDiscuz
2
0
Would love your thoughts, please comment.x
()
x
| Reply
×